you, yourself & the World sneak peek book extract's

get a glimpse into the upcoming book, each week 2 questions from each section get posted out for you

Hey guys, welcome to the solo travel book extracts & sneak peek page for my book; You, Yourself & the World. On this page you will find extracts from each section of the book so you can get a feel of the layout and how the questions are answered.

what is you, yourself, & the World all about?

Fear and a lack of understanding stops many from turning daydreams and fantasies of long term solo travel into reality. It may well be the case for you – and that where You, Yourself & the World comes in. While there is a infinite amount of information about solo travel, most is for short term trips. It’s guides, ‘things to see and do’, ‘Ultimate this and that but where is the information about day to day life? – Where is the information about how your mentality will change, or about how brutal it can get especially on tight budgets? You have to dig deep to find it and that’s why I’ve written this book for you. 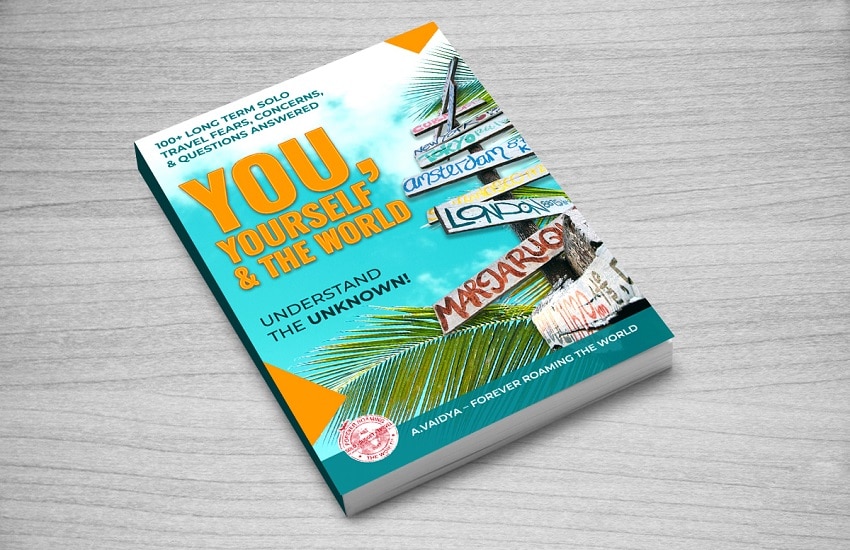 For those of you unaware of the purpose of the book, You, Yourself & the World is here to provide a deeper understanding of long term solo travel. It might be a daydream or passing thought right now, you it might be something you’re looking to do it in the future but have too many fears and concerns to take the leap and that’s perfectly natural.

PURPOSE OF: YOU, YOURSELF & THE WORLD

From the experienced position I’m in, I’ve written this book to give you more insight and knowledge before your trip so you have better understanding, to help combat fears and concerns.

The book itself is set out in a question and answers form. Each question is answered in both short and long form. The short answers provide more of an overview, while the long answers go deep into detail. It also provides an in depth look at what long term solo travel life is really like. (These solo travel book extracts will give you an idea of the layout of the book)

You, Yourself & the World contains 100+ questions, fears, and concerns you may have from when long-term solo travel is just a little passing thought in your mind to when you’re actually doing it. No stone is left unturned. (Check if your fears, concerns or questions are answered in the question listing)

Please bear in mind though, this book is for those of you looking to solo travel 6 months + to indefinitely in the future. And be forewarned, there is no sugar-coating, some answers may not be what you want to hear but they are honest from years of experience. By the end of the book you will have a much better idea if long-term solo travel is for you or not.

What puts me in a position to write this type of book and answer questions for you?

I’m a long term solo traveler, more accurately a nomad, who’s been drifting slowly from one country to the other, since 2010. For me, short trips are not 24 hours here and there, or a few days. A short trip for me is at least a month. And, long solo travel trips, well they can go on for years. (The longest lasted 6 and a half years without returning home to England.)

But it wasn’t always the case. Pre 2010, I was the same as everybody else, daydreaming, fantasizing, imagining about solo travel but too scared to take that actual first step. I conjured up every excuse possible not to actually do it. I was poor, with a turbulent upbringing and destined for failure, somebody like me couldn’t just get up and go traveling; well, that’s what I convinced myself. It didn’t matter how against the grain I was, or saw life differently to what society deemed as normal, when you’re as broke as me there is no way out.

ENOUGH WAS ENOUGH, IT WAS TIME JUST DO IT!

With my life heading nowhere but spiralling into an abyss of negativity and darkness something just triggered inside me. The procrastinating stopped I bit the proverbial bullet and thought ‘fuck it I’m doing it.’ – I had enough of accomplishing nothing, feeling like shit and sleeping on my mums couch!

I had so many solo travel questions, concerns & fears bombarding my brain but without letting another soul know, I researched, planned, applied for the correct visa, booked a ticket and scrounged as money as I could, packed my bags and left England to backpack around Australia with just £600 to my name and haven’t stopped since. (My first long trip lasted 6 and a half years.) – Turns out most of the information I researched was useless. Most of it was for short term solo travel or just fluffed up. It was nice to hear before hand but didn’t prepare me for what solo travel was really like.

Over the years, floating, roaming, backpacking, and living a nomadic life all over the world I’ve been lucky enough to learn so much. I’ve gained valuable experience, learning from others, and that’s what put’s me in a position to give some viable and credible advice and tips to you.

I've been in your travel shoes

I remember being in your shoes; I know what It’s like when solo traveling is just a fantasy in your head, how you imagine it to be, when that thought manifests but something keeps holding you back. I’ve been there, happy, sad, lost, confused, overwhelmed, thinking I’m out of my depth, feeling homesick, not having answers when they’re thrown at me.

You, Yourself & the World will help you, provide you with answers and understanding to ease your mind, to help you feel more comfortable to take that first leap into long term solo travel; just like you daydream about. 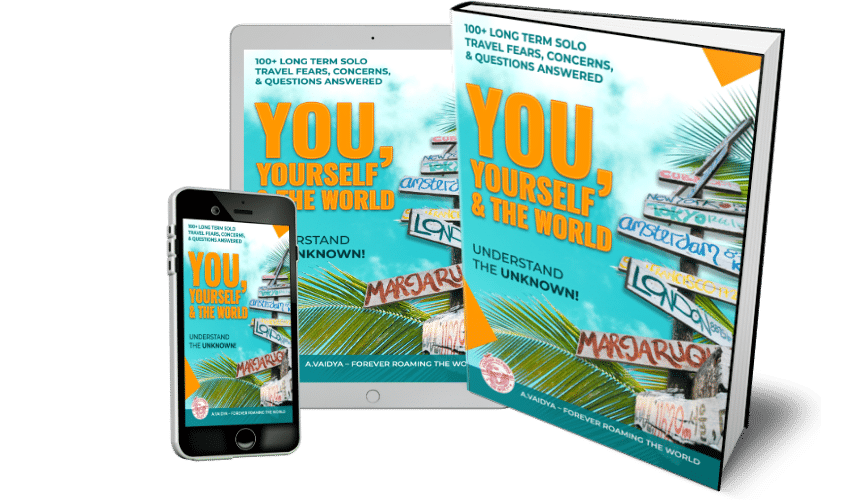 You, yourself & the world IS BROKEN INTO THE FOLLOWING SECTIONS:

Each section contains both short and comprehensive answers

The series of posts below will contain extracts from the book, each post will include two/three questions and detailed answers from each section of the book, which will be released each Tuesday at 5pm GMT until the launch of the book itself.

Check for every question answered in the book here